Aller au contenu
To facilitate access to the first stage of study leading to the chemical engineer courses at colleges in the Gay-Lussac Federation, the ENSCR has created a Preparatory term (SPI) for foreign students..

This term is specifically aimed at foreign students who, in their countries of origin, have just obtained the qualification or passed the exam giving access to higher scientific studies, but who have little or no knowledge of French.

When does the SPI take place? 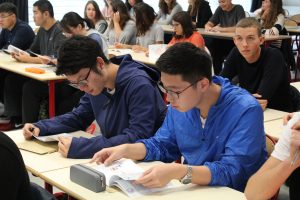 The preparatory term (SPI) runs from mid-February to mid-June of the academic year and consists of a intensive teaching of French as a foreign language (of the order of 16 hours a week) English lessons and upgrade lessons on science subjects (maths, physics and chemistry) completed by practicals and tutorials.
At the end of the term, the students join the first cycle international Chem.I.St of the Gay-Lussac Federation in Clermont-Ferrand, Lille, Pau, Rennes or Strasbourg. 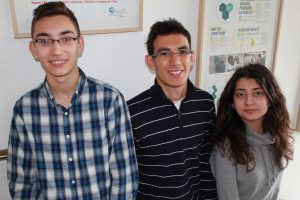 Ramis Mustafayev
“I come from Azerbaijan. I am very satisfied with my stay in France. I spent the first week in the host family where I got to know the French tradition. Education in France and Azerbaijan is not the same, which is why education here is a bit difficult. But now, after the adaptation period, everything is perfect. And I am very happy to have had the chance to study at the National School of Chemistry of Rennes “.

Lucas Martin Ishida
” I am brasilian. I knew that going to another country would be very difficult, mainly if I did not speak the language well enough. The Pre-Integration Semester (SPI) makes things easier. The first week in the French host family is essential for learning the culture and the language. In addition, the opportunity to study with foreign students requires me to develop my knowledge of the French language and to know other cultures. The lessons are well done because teaching languages ​​is as important as teaching science. Unlike the teaching practiced in Brazil, during the courses there are many presentations and practical work, which allow to improve oral skills. After a period in the host family, I entered a university residence where I discovered university life. Integration is not always easy, but the SPI program is essential to help foreign students overcome all the difficulties linked to the distance from the country of origin. “

Kamilla Mammadzada
“I am from Azerbaijan. A month ago, I arrived in France. I stayed with a host family for a week. It was important for my adaptation. At first it was difficult, but now I have no difficulties. And it’s wonderful to study here at the ENSCR.”